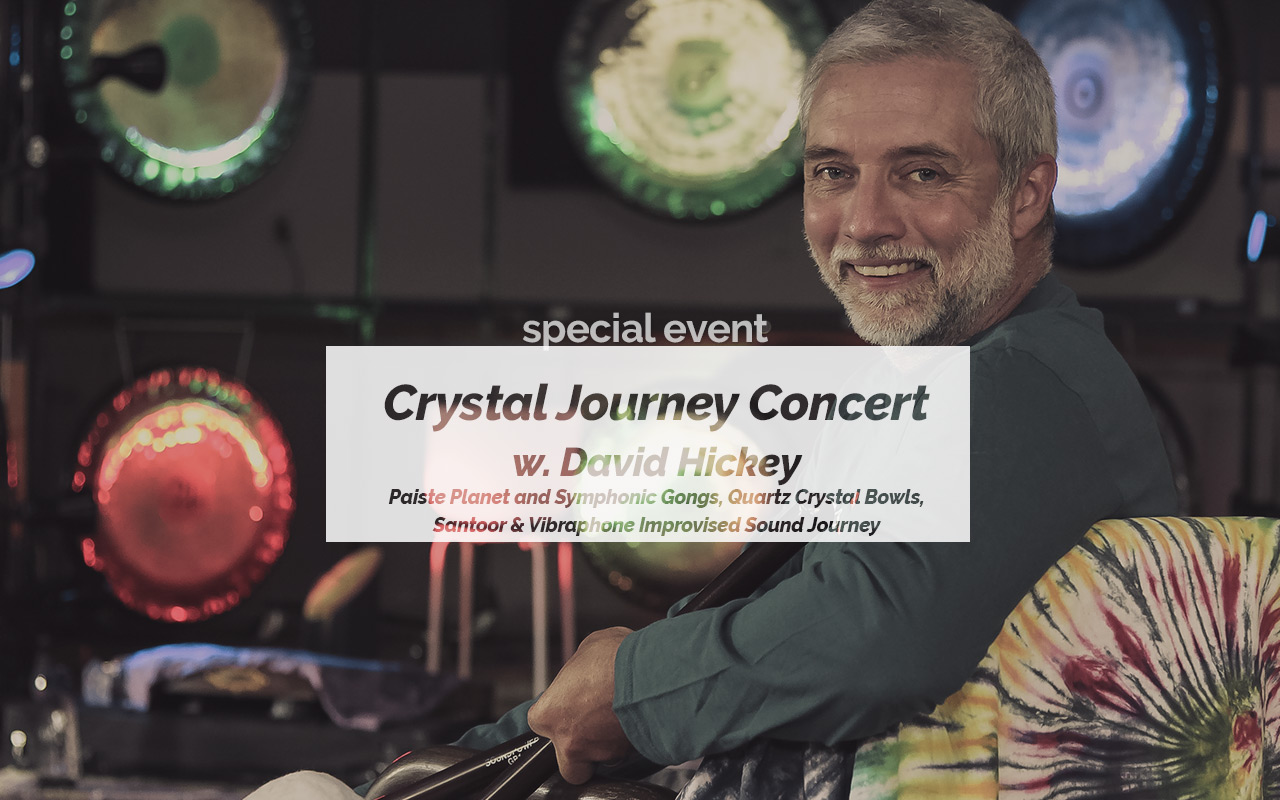 What You Can Expect:

The show will take place in two 40 to 50 minute sets. David’s usual set up includes 10-12 Quartz Crystal Bowls, 8-10 Paiste Planet Gongs, Vibraphone and Santoor. Nothing is amplified, pre-recorded or rehearsed. Each set and performance is sonically pure and unique. You can purchase CDs at the shows with cash or cheque or online with a credit card.

We invite you to take a seat or lay down as close to the instruments as possible to get the greatest effect. Remember to bring a yoga matt, blanket and/or pillow as most venues will have floor space to lay down. Chairs for regular seating are also available. Where possible we encourage you to share rides and car pool. It not only saves gas but helps to reduce our carbon foot print on the earth and traffic.

Planet Gongs are tuned to the natural harmonic series based on the orbital properties of the Earth, Moon, Sun, and Planets. All of these gongs resonate in harmony with the celestial bodies and communicate a distinct aspect of the Music of the Spheres, which was first documented by Pythagoras in the 6th Century BC. Each planet gong contributes a vital pitch to the total harmonic resonance of our solar system.

The bowls are made of 99.992% crushed quartz crystal that is heated to 4000 degrees in a centrifugal mold. The thickness of the bowl determines the note, digitally tuned to C D E F G A and B corresponding to the charkas, our energy centers; root (C), sacral (D), solar plexus (E), heart (F), throat (G), third eye (A), and crown (B). The diameter of the bowl determines the pitch, ranging from 6 inches to 22 inches.

The archetype of the instrument may be seen in a harp, carried horizontally and struck with two sticks, found in iconographical documents of the ancient Babylonian (1600-911 BCE) and neo-Assyrian (911-612 BCE) eras.

Persian santoor consists of a trapeziform case made of walnut wood, approximately 90 cm wide at the broad end, 36 cm wide at the narrow end and 6 cm deep. The strings are fixed to hitch-pins along the left-hand side and wound round metal wrest-pins on the right by means of which they are tuned with a tuning-key (Tuning Wrench). Each quadruple set of strings rests on a movable bridge of hardwood (kharak). The bridges are placed so that the strings are divided into three sections, giving the fundamental note and two higher octaves.

There are nine (or sometimes 10, 11 and 12) quadruple strings an either side so that, with 18 groups of strings, 27 different notes can be played. The bass strings are of brass or copper and the trebles of steel.

Persian santoor is played by striking the strings with two light hammers (mezrab) held in three fingers of each hand. The ends of the sticks are usually covered with cloth to soften their impact on the strings.

Infinity Member? Sorry no discount on this one!

thanks for inviting + sharing.... 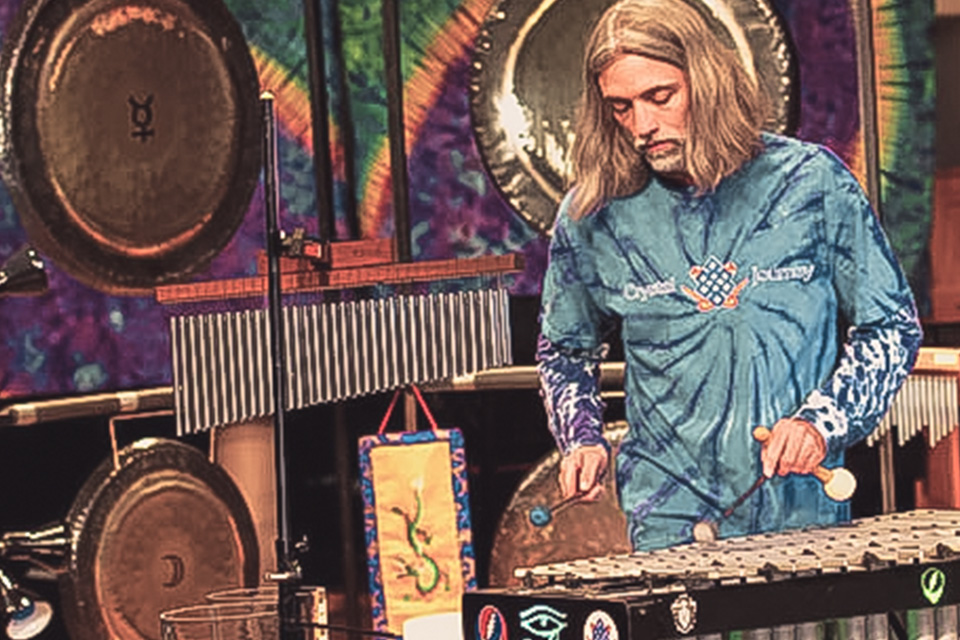 Based in Mount Hope, Ontario, Crystal Journey and David Hickey performs with Quartz Crystal Singing Bowls, 10-15 of them. Each produces a pure note or tone, the purest there is. They are accompanied by a Vibraphone, Santoor and 8-18 Paiste Planet, Symphonic and Sound Creation Gongs. Every gong features a strong fundamental note tuned to represent a natural harmonic series based on the orbital properties of the Sun, the Earth, the Moon and the other planets. It's like having a full orchestra.

Crystal Journey has been touring Canada and the US coast to coast for the past ten years and has performed over 1000 shows. Crystal Journey has also released 9 CDs to date. I have played the Bowls and Gongs accompanied by various musicians as well as with the Winnipeg Chamber Orchestra in June of 2006.

As 2014 unfolds, I am looking forward to taking my music to ever increasing numbers, creating conscious awareness across Canada and the Globe with a message of unity and peace.

The intent of the performance is to create soothing, meditative and healing music. Each one of my performances is completely improvised, and unique. The music attracts a full range of listeners. My concerts are in two sets, each lasting about an hour in length.

To create expansive and improvised music, to awaken consciousness and to provide a Cosmic Musical Journey into the Unknown.

Some notable performances include:

Our Trial Membership for only $29 gets you ALL-ACCESS everywhere we yoga for your 1st 30 days.   ➤