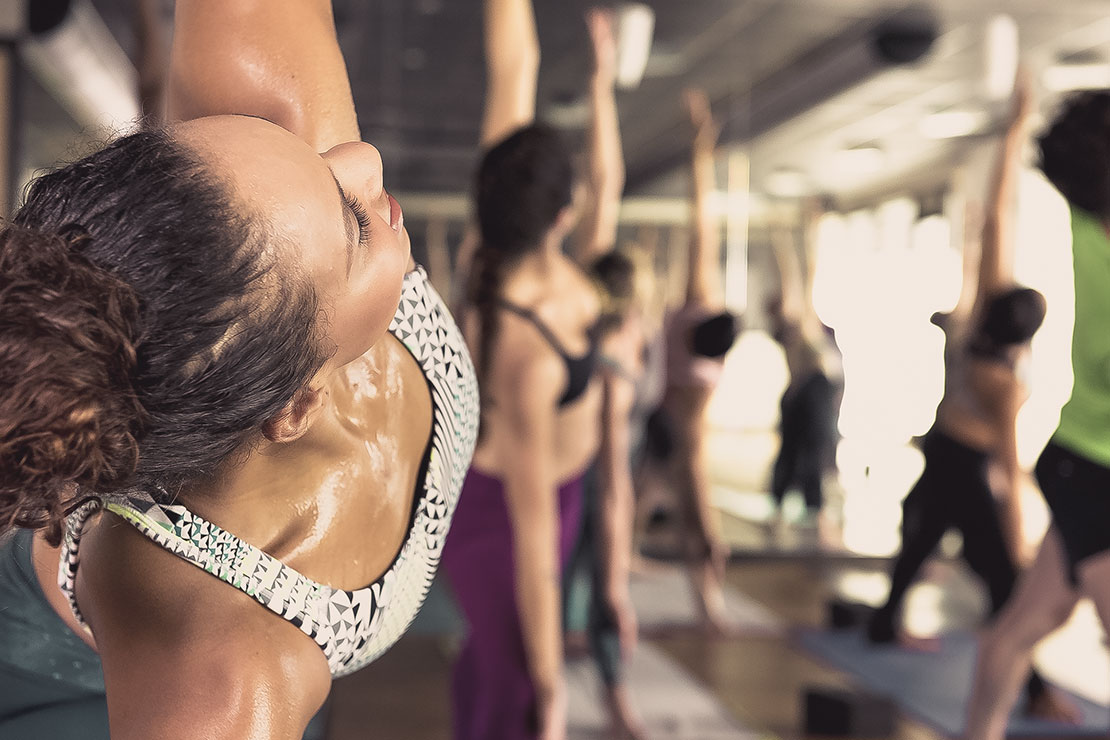 The sweat starts almost instantly, dripping onto my mat before we’ve finished the first exercise. Lying on my back in a windowless, mirrored room at Moksha Yoga Halifax, I feel like a melting glacier trying to resist global warming. Our teacher walks through the room, offering gentle encouragement and the odd adjustment. “Embrace the heat,” she says warmly, and I do my best, even as sweat pools embarrassingly in all my crevices.

Though I’ve practiced a fair bit of yoga in the past, this is my first hot yoga class. And just a few minutes into it, one thing is very clear: they aren’t kidding about the heat. The class is held in a room that’s been heated to 37°C. If you can imagine a tropical island with no breeze, you’ll start to get the picture.

The benefits of hot yoga

Those who are devoted to the practice say hot yoga has all kinds of benefits. The one that’s touted most often is detoxification: heavy sweating is said to help flush toxins from the skin. “The heat also allows you to go a little more deeply and safely into the postures,”says Joanna Thurlow, the owner of Moksha Yoga Halifax, “so you know you’re really warming up the muscles and you can really approach the postures from a safe place.” According to Isabel Lambert, director of Tula Yoga Spa in Toronto, working in a heated room also elevates the heart rate, which makes the body work harder. “It’s really for people who want a more intense workout and for those who want to develop strength, flexibility and tone along with a cardiovascular workout.” She also says working in heat helps the body relax, improves breathing (which helps conditions like asthma) and focuses the mind, which develops better mental concentration.

Like with “regular” yoga, hot yoga comes in all kinds of different styles. Bikram yoga, which is practiced at certified studios right across the country and the world, is still considered the original incarnation of the form. Those classes follow a set sequence of 26 postures and focus on endurance. Moksha Yoga was founded by two yogis from Toronto who wanted to integrate an environmental component to their hot yoga practice. All Moksha studios, found across Canada and the United States, adhere to “green” principles, incorporating things like energy-efficient heating and sustainable flooring. Others, like Lambert, teach their own versions of hot yoga, in classes like ‘hot power flow.’

How to prepare for hot yoga

The key to enjoying hot yoga is to go in prepared. “You have to be super aware of your own health,” says Thurlow. She says it’s important to be well-hydrated before taking a hot yoga class, and recommends drinking “litres and litres of water throughout the day” in anticipation. Before a class, try not to eat too much. And be sure to replenish lost minerals and electrolytes with a fortified drink afterward, such as Gatorade, Emergen-C or coconut water. Both Thurlow and Lambert stress that because yoga isn’t competitive, everyone should take a class at their own pace. “If you feel weird, you take a break,” says Thurlow. “There’s no ego in yoga, so you just do what you’re capable of.”

Some cautions about hot yoga

But some, like Halifax-based naturopathic doctor Sandra Murphy, regard hot yoga warily. “There’s a chance of getting injured,”she says, citing improper supervision and a tendency to over-stretch in the heat. “You could be going beyond your end point, because you’re losing the ability to know where your edge is… so you’re artificially stretching the muscle.” Murphy is also a huge proponent of infrared sauna-therapy for detoxification purposes. Plus, she readily recommends regular yoga as a form of exercise, but doesn’t believe the two should necessarily go hand-in-hand. She adds that in India, yoga was traditionally practiced in the early morning to avoid the intense heat of the day. “I just don’t think it’s safe,” says Murphy.

Can you get a heat stroke from hot yoga?

Though Lambert says she’s never seen anyone suffer from heat stroke in a class, she does advise people who suffer heart problems to consult with a doctor prior to attempting any kind of hot yoga class. She also suggests that women should not practice hot yoga when pregnant. People with high or low blood pressure are advised to try an easier form, and to limit the amount of time they spend in the heat. But generally, she says hot yoga is safe and gentle for everyone from children to seniors. “That’s one of the benefits,” she says, “it’s is more challenging and intense, but everyone can get something from it.”

How you feel after class

Lying on my back near the end of class, I have to admit that I’m feeling well-stretched and surprisingly relaxed. I’m also feeling more sweaty than I’ve been in a long time. My cotton tank top is drenched. But clearly, embracing the sweat is the secret to hot yoga. “A lot of people tend to feel self-conscious about the fact that they’re sweating a lot,” says Thurlow. And because they’re so self-conscious, they want to wipe their sweat away. When really, it’s better just to let the sweat flow. “When you wipe it, you close your pores, and that means your body has to produce that sweat again. It’s best just to let it flow and realize that everyone around you is sweating just as much.”

* article taken in full from http://www.besthealthmag.ca/best-you/yoga/the-benefits-of-hot-yoga/

Our Trial Membership for only $29 gets you ALL-ACCESS everywhere we yoga for your 1st 30 days.   ➤